hellomagazine.com Queen Elizabeth was joined by her beloved corgis and dorgis for her Vanity Fair cover celebrating her 90th birthday.

Surrounded by corgis is exactly how Queen Elizabeth wanted to be photographed for Vanity Fair. Her majesty landed the cover of the magazine’s Summer Issue joined by her four show-stealing canine companions — Holly, Willow, Vulcan and Candy — in honor of her 90th birthday.

The photo, which was part of a series of portraits shot by renowned photographer Annie Leibovitz, shows England’s longest-reigning monarch at home in her element at Windsor Castle. Annie told Vanity Fair, “The most moving, important thing about this shoot is that these were all her ideas." 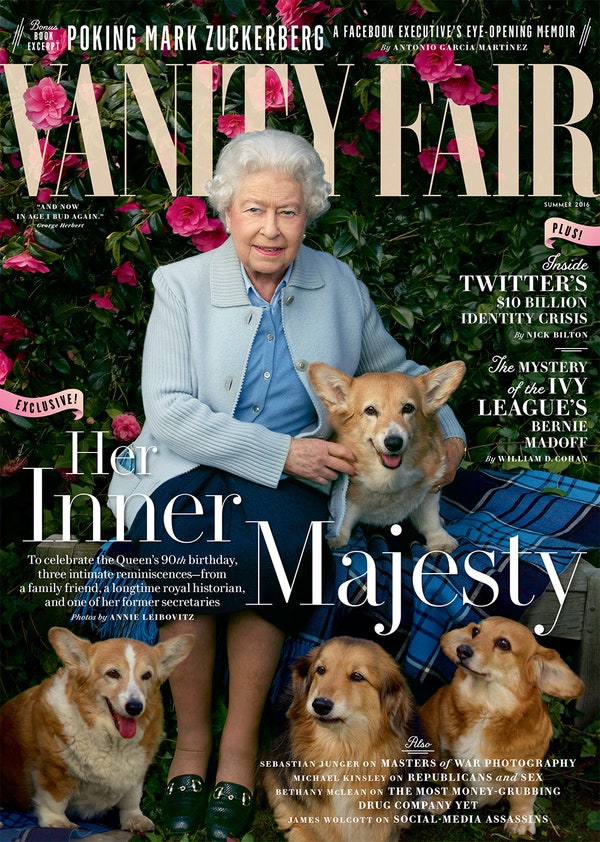 “[The Queen] wanted to be photographed with her grandchildren and great-grandchildren; her husband, Prince Philip, the Duke of Edinburgh; her daughter, Anne, the Princess Royal; and her corgis," the acclaimed photographer said.

She added, "I was told how relaxed she was at Windsor, and it was really true. You get the sense of how at peace she was with herself, and very much enthralled with her family.”

In the portrait series celebrating her milestone birthday, the royal also photographed alongside her husband of nearly 69 years on a couch by a fireplace. The Queen has referred to Prince Philip as "my strength and stay all these years."

The 90-year-old posed for the publication's cover with her two corgis and two dorgis, who previously starred in another portrait shot by Annie on the steps at the rear of the East Terrace and East Garden of Windsor Castle.

Corgis have been an integral part of the royal’s life since 1949. Her Majesty began a program of royal corgi breeding following her first puppy Susan. Queen Elizabeth engineered her dorgis Vulcan and Candy herself after one of her corgis mated with her sister Princess Margaret's dachshund.

STORIES OF THE ROYAL FAMILY

Her Majesty’s newest portrait starring her furry mates isn’t the first time the spotlight has been stolen from the royal. Last month, a commemorative birthday photo, also shot by Annie, was released showing the Queen with her grandchildren and great-grandchildren, including Mia Tindall.

Zara Phillip's young daughter stole the show from the monarch and her equally famous cousins — Prince George and Princess Charlotte — flashing an angelic smile as held tightly on to her great-grandmother's handbag.

The two-year-old was also joined by her cousins and second cousins Viscount James Severn, Lady Louise, Savannah Phillips and Isla Phillips for the photo. Mike Tindall previously opened up about his daughter’s now infamous photo expaining, "It just happened at the right time. She was being a bit naughty. The queen got it quite right when she told her: 'Just hold the handbag now' and she did that. It ended up being a great photo for her."