The Hairy Bikers – aka Si King and Dave Myers – are back with the fifth book in their Hairy Dieters series, and this time they've gone vegetarian. Inspired by summers spent in Italy and France, where the vegetables were so good they pretty much forgot to eat meat, and with Dave getting into growing his own too, the duo are now non-carnivores around four days a week. So what have they learned from their forays in the world of vegetarianism? We find out…

There's no need to get all 'worthy' about what you're eating…

"With a lot of the old school veggie recipes, and in the Seventies and Eighties, you'd go to a veggie restaurant and you got this sense of worthiness," explains Dave. "You were presented with a plate of brown, and three forkfuls in, you might feel self-righteous, but you were bored with it. Whereas we approach a plate of vegetarian food as we would any other recipe."

STORY: The flexi-dining restaurants where vegans and meat-eaters can eat together

Si says: "We've never lectured, nor do we want to. It's simply, this is where we are at the minute, and it's always done with integrity, not because it's a fad. It's always done because that's just how our lives are."

To celebrate #WorldBakingDay…🍰 Our Spiced Apple Muffins from our new Hairy Dieters book, Go Veggie, which is out tomorrow! Even when you’re dieting there are times when only a bit of cake will do and these spicy muffins go down a treat with a cup of tea. They are reasonably low in calories but if you like, you could make 24 little fairy cakes instead of 12 muffins. Just watch you don’t eat double the number! Link to recipe in our bio… #instafood #hairybikers #vegetarian #muffins #hairybikers #goveggie #hairydieters

However, it’s important to remember that going veggie can make a difference, to you as well as the planet…

"It makes sense to eat more veggies ecologically, and health-wise," says Dave. "It's about having a balanced diet; I think if we swayed the balance towards veggie, we'd all be better off."

"It's better for the planet as well," says Si. "At home, when we were growing up, meat was the smallest bit you had because it was expensive, and now our consumption of meat, without even thinking about it, it's pretty unsustainable."

The veggie tacos we made on @thismorning today for @schofe and @hollywilloughby👌! Link to #GoVeggie in our bio for recipes galore .. #veggie #meatless #vegetarian

"We've tried to take some meat classics [in The Hairy Dieters Go Veggie], like a really great looking pie – well the pie's mushroom and chestnut. Then a really great looking chilli – there’s no meat in it – so there are those bridging recipes," says Si. And then, of course, there’s their veggie burger recipe. "So many veggie burgers that you buy, it’s like bubble and squeak in a bap, but this one," says Dave, "has texture. We've got black beans to give it that meaty flavour, we put brown rice in, which gives it a bit of chew, then it’s cooked with beetroot."

If you're a carnivore experimenting with going veggie, you'll still miss the odd bit of meat…

For Si and Dave, it's all about the bacon. But Dave won’t be swayed by anything streaky, his meaty kryptonite is "a nice, dry-cured back bacon sandwich, with some brown sauce and sourdough bread".

The wonder of spring my veggies have sprung.. dave pic.twitter.com/3TegNdpbAR

Going veggie doesn't have to be a gateway to veganism…

"There are a few vegan recipes in the book, just by accident," says Si, but neither of the cooks plan to go vegan. For Dave, that's because, "I can't work out why I would be vegan for dietary or health reasons, and that's the stumbling block."

It's about time pubs and restaurants upped their veggie game…

"Going to the pub as veggies, and it's the goat's cheese tartlet, the wild mushroom risotto and the vegetable lasagne – it's so predictable, it doesn't have to be like that," says Dave.

Don't get hung up on superfoods, great food is what it is…

"I don’t know what superfoods are, really," says Dave. "There are some foods better than others. I think a balanced diet is what it's all about, certainly in the Mediterranean, where meat is almost like a garnish." 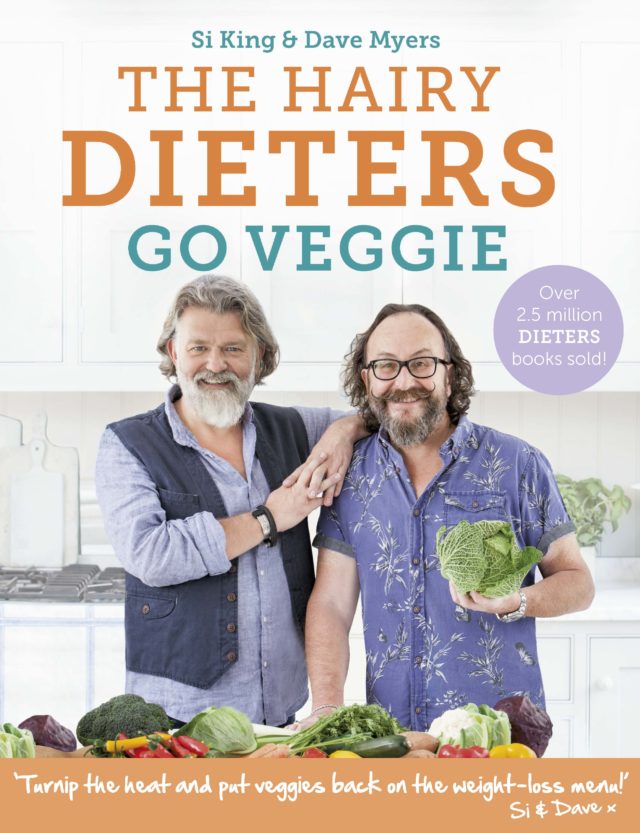